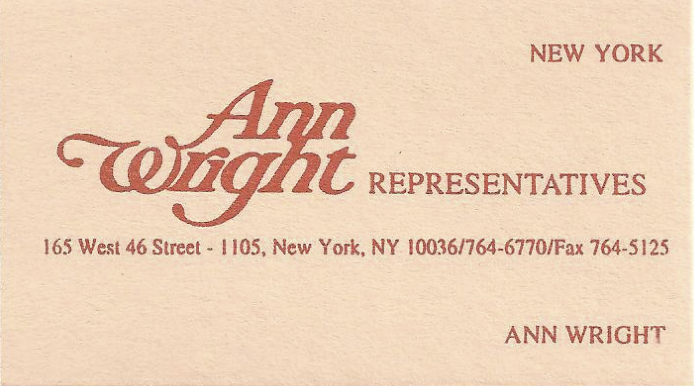 Ann Wright Representatives is full service talent and literary agency that represents Film, Television, Commercial, Theatre, and Voice Over artists. Susan Wright works as the head of Head of the Legit Theater, Film and TV department with Ann Wright.

Accepts Headshot and Resume by mail only. Interviews by appointment only. No Call, No Drop-off.

A legend in the business, Ann Wright has been an agent for over 40 years! Ann has been President and Owner of her own full-service talent agency, incorporated since 1962. Ann Wright began her career at CBS TV Casting Department servicing the live prime-time dramas of the time. Some of Ann's casting suggestions helped launch the careers of many stars.Ann joined Compton Advertising where she assisted the casting of on-camera commercials and voiceovers, as well as, many major television campaigns. Three years later Ann opened her own agency.

Susan Wright started her agent career in 1981 with the Ann Wright office in Los Angeles, supporting the careers of talents such as Rob Lowe, Sara Jessica Parker, Alan Rachins, and Michael Delorenzo. She worked in the business beyond Ann Wright in production for Dick Clark Productions and for the film company which produced The Milagro Beanfield War, directed by Robert Redford. Susan returned to Ann Wright NY and is Head of the Legit Theater, Film and TV department.

Their actors have acted in Hollywood films including 27 Dresses, The Proposal, Monsters Inc, Angels & Demons, Thumbelina and Frida. As well as the following television shows: Law and Order: SUV, One Life to Live, Royal Pains, All My Children, Nurse Jackie, Rescue Me, The Wire, As The World Turns, Gossip Girl, General Hospital.